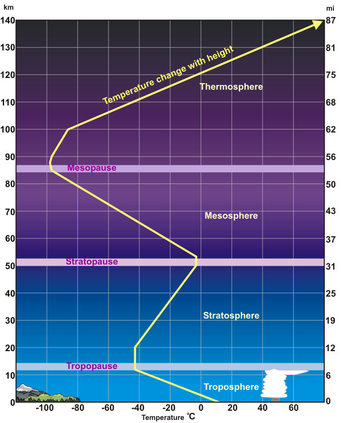 Image: http://www.srh.noaa.gov/jetstream/atmos/atmprofile.htm
The atmosphere of Earth is the protective, nurturing envelope of gases surrounding our planet.  The atmosphere's first 80 km thick layer, the homosphere, is thoroughly mixed, allowing for a life-supporting mix of about 78% Nitrogen and 21% Oxygen (1% others like Carbon Dioxide, Neon, Argon, Helium...).  The upper layers of the atmosphere are more separated out by density in a region referred to as the heterosphere.
The Earth has several distinct atmospheric regions characterized by different temperature/altitude trends.  In the bottom-most layer, the troposphere, air temperature decreases fairly constantly with an increase in altitude.  This trend discontinues at the boundary between the troposphere and the next highest layer, the stratosphere.  In the stratosphere, jets enjoy a pretty calm set of air conditions, passing over the turbulent weather layer below.  It is here in the stratosphere that the UV-shielding ozone layer can be found.  The air temperature in the stratosphere increases steadily with an increase in altitude, but does not attain temperatures above the melting point of water (0 C).  Above the stratosphere is the frigid mesosphere.  Meteors burn up in the mesosphere as "shooting stars".  The mesosphere plays host to the coldest atmospheric conditions on Earth.  Above the mesosphere, low-earth-orbit spacecraft fly and astronauts conduct spacewalks from the (now defunct) space shuttle.  In this layer, the thermosphere, temperature increases with altitude increase - but molecules are so far spread apart that you wouldn't "feel" the heat in the thermosphere.  At the boundary of two temperature layers are gradient areas called -pause's.

Earth's atmosphere is absolutely necessary to support life on Earth.  Conditions in the atmosphere now are ever changing and are the subject of much research.  The fields of atmospheric chemistry and climatology, for instance, are thriving and ready for eager researchers to delve into the mysteries that await.  How has the atmosphere changed over time?  Are the atmospheric conditions now different from the time around the Earth's creation?   Why is Earth's atmosphere unique - and how is it owing to our position in this solar system?  Do other extrasolar planets have atmospheres like ours?
Loading
Powered by